Ever since the very first shape was created there was one big issue with animations. Animations are oddly specific to the avatar size and more importantly individual bone size, which causes a lot of problems when animating or simply just posing. You sit on a chair that was made for the default avatar size but you are smaller than that? Tough luck, your legs will most likely clip into the chair, your arms will hover above the leans and you will most likely not even properly sit in that chair either. With the introduction of hover height we got a simple quick way of fixing at least the height so we don't sink into the ground or whatever object we are sitting on, however, the main issue remains, most poses will hardly fit anyone whose shape doesn't match that of the rigging template that was used and even in those cases often times your hands clip into your attachments or worse.

Inworld, real-time posing. The ability to rotate all available bones (133 currently) including those of Bento at any time, anywhere we want as long as they follow the bone hierarchy. This feature allows us to make small scale changes to existing poses (and animations) without having the original creator to make a special version for you only, it also allows us to add great detail to poses that weren't previously fitted with these. One example of this would be adding Bento bone overrides to a pose that was created without Bento in mind, no more stiff hands, no more tails or wings clipping into walls and furniture, you get full control over every single bone of your avatar, given it is rigged to one. This would allow us not only to fix every pose for our specific needs but create completely new ones on the fly, made directly inworld for our avatar to fit perfectly. 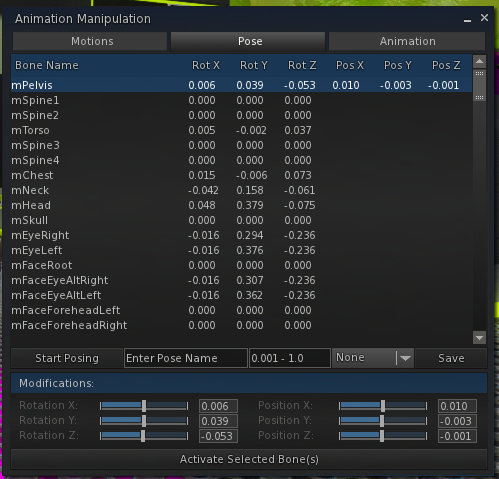 The current Poser comes with additional features that allows it to enable and disable every bone override separately, this allows you to specify a bone override to be used for a single bone or a small group of bones, allowing the underneath pose or animation to continue playing without interruptions. An example for this would be holding a stick in your hand while walking. You'd enable the bone overrides for the shoulder, upper and lower arm and the hand as well as all fingers, create a holding pose and save it or keep it running. You'll end up holding the stick just like you want while all other animations such as walking, crouching, running etc will continue to work normally. 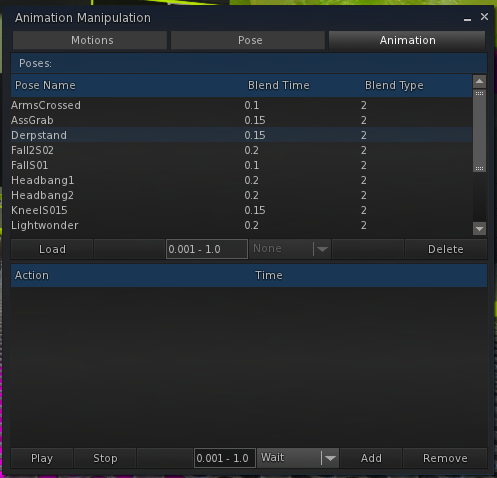 Ontop of bone overrides the current Poser also has a feature similar to Gesture queues simply called the "Animator" currently, it allows saved poses to be put into a list, together with WAIT and RESTART commands in order to play them in order and thus create a basic animation, this can be used in many ways and can be scaled in complexity up to the point that you are playing hundreds of saved poses in a row all with different bone overrides creating a smooth, perfectly fitted animation for a scene or a theater for example. The possibilities are endless.

This is the primary missing feature currently. There is absolutely no synchronization between Viewers, this would need either Viewer specific synchronization, which would lock out all Viewers not having this feature or full server side support allowing to send poses or pose changes to other clients the same way Hover Height currently works.

Currently the Poser has no means of exporting saved poses other than the locally saved XML files it creates when saving a pose. I was planning to include BVH or ANIM export support but for that to work i'd first need some extensive knowledge how BVH/ANIM files look and work.

I heard the complains about possibly stealing poses or entire animations. There are many easy ways to fix these should export be a thing, many of which simply include blocking the export function unless you specifically chose to start your posing from an empty T Pose. Even without it i hardly see an issue here. The poser is meant to be the ultimate posing tool, making poses as we know them today mostly obsolete, sold poses are already given away for free since they are practically worthless, with a Poser that allows you to pose any bone at any time anyway you want they would simply become even less than that, they would become a simple inventory object whose only purposes are saving your pose (permanently) on the server or sharing it to others. There is no stealing anyone's poses if anyone can easily make any possibly pose directly in world in a few minutes and fit it for their avatar on top of that. Clinging to worthless 10L$ poses will only ever limit and ultimately break this feature, making it less and less attractive until there is simply no point having it in the first place.

I'd simply recommend trying the feature out yourself before making any assumptions. It is currently available in the latest Black Dragon Viewer update and can be found HERE for anyone to test it out, please use the 64bit version, the 32bit version is only there so the auto-updater has something to update to until 64bit has a launcher. It can be found in the main menu in Dragon - Useful Features - Pose/Animation Manipulator.